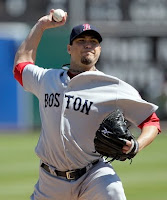 Yeah I know the odds are against the Red Sox. In fact they are damn near impossible. They are 8 games back in the loss column with only 19 games left to play.

You don't have to be a math whiz (and I am not one) to see that their chances are not THAT much better than the Pirates chances. And the Pirates were eliminated around Cinco de Mayo.

The only remote way the Red Sox can ever get anything done this year is if they win and the Yankees and Rays lose.

Well guess what? Today, thanks to J. D. Drew's bat and a nice performance by Josh Beckett, the Red Sox won.

The Yankees got swept and the Rays let up a walk off bomb in the 9th.

If this keeps happening, they can make up those 8 games and possibly play for all the marbles this October.

Far fetched?
Sure, but until they are eliminated, they AREN'T eliminated.

Let's go Sox. If you are going to make it, make sure it is because the Yankees and Rays EARNED it.