The season may have been picked off at first 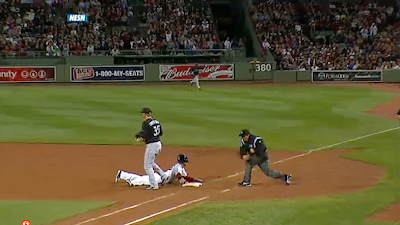 I know you can never play the whole "alternate universe" scenario. You can't say "That double play killed us because the next batter hit a double" etc etc. You don't know how a pitcher would throw differently or how the defense would be set up if a play unfolded in a different way.

That being said, I am only human and when Ryan Kalish got picked off and that was promptly followed by Victor Martinez's double that would have scored Kalish... I grumbled "How could you get picked off in the 9th inning of a one run game with the big bats coming up?"

The Red Sox are 8 games back with 14 to play. The Yankees clobbered the Orioles with Sabathia becoming a 20 game winner... the Rays rallied against the Angels and won in extra innings... and the Red Sox would have to be perfect to make even a remote chance to win.

So no... it doesn't look good.
But let's update the tally anyway.

But odd that the it is still in the plus column, isn't it?