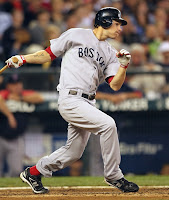 Here we are down the stretch and the box score tonight looks like one of those split squad games in spring training.

It's safe to say that when the season began with images of playoffs dancing in our heads, we weren't expecting Daniel Nava, Lars Anderson, Ryan Kalish, Jarrod Saltalamacchia, Darnel McDonald, Josh Reddick, Yamaico Navarro and Scott Atchison to be big contributors.

But here they are.

And with it, the Red Sox got a sweep in Seattle... granted they resembled the Pawtucket Red Sox... but we can't get picky.

The Red Sox clinched a winning record and if they split their next 16 games, they will be a 90 win team.

Well as long as the Red Sox keep winning and either the Yankees or Rays lose, there is a slight glimmer of hope.

ONE of the Yankees or Rays will lose tonight. I guess they are still alive. It's not likely, but were the 2007 Rockies?