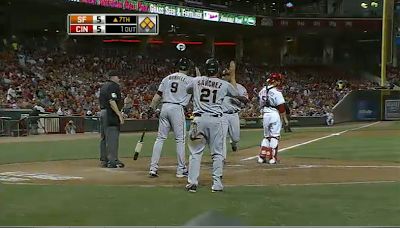 I bet when the Giants came from behind to beat the Reds on June 7th of this year, neither Giants nor Reds fans thought it was a big deal.
There was still 2/3 of a season left to play and who was going to remember a game that Enerio Del Rosario let up a go ahead RBI single to Juan Uribe?
It looks pretty important now...
Hear me out.
Right now, I think nobody in the National League wants to face the Phillies in a best of 5 series. Halladay, Oswalt and Hamels are all pitching like aces. Good luck winning 3 out of 5.
Stretched out over 7... maybe you can pull it off.
With the National League as tight as it is, home field advantage in the Division Series (and avoiding Philly's big 3) right now would come down to the NL Central leading Reds and the NL West leading Giants.
Both teams have identical records, 83-64.
So playoff seeding and essentially home field advantage (and avoiding Philadelphia) will be decided by their head to head record.
The Giants and Reds are done playing each other in the regular season. Their final season series record?
Giants 4 wins... Reds 3 wins.
So because the Giants won one more game head to head, THEY would open the playoffs at home and the Reds would travel to Philly.
Each win the Giants had over the Reds is now looming large... especially that 1 run come from behind win in June that I bet nobody noticed.
15 games left Giants. They are ALL big now... as big as the June 7th game.