Why won't the Reds use Aroldis Chapman as their closer? 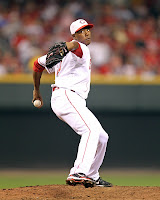 I remember when I saw the movie Amistad, I was frustrated that Steven Spielberg didn't use his cast effectively.

He gave several of the movies biggest and most emotional moments to Matthew McConaughey... and as I wrote before, McConaughey is good at SOME things, but he was out of his element delivering the big moments.

Meanwhile, Morgan Freeman was in the cast and given virtually nothing to do. Now I am going to go out on a limb and say that an actor of Morgan Freeman's talents were better suited for dramatic speeches than Wooderson from Dazed and Confused.

Well there is a similar waste of talent going on in Cincinnati.

Francisco Cordero is awful. AWFUL and they have a fire baller in Aroldis Chapman just sitting in the bullpen.

The guy hasn't let up a run yet and chances are any NL opponent won't have much of a scouting report on him come playoff time.

Each of those teams had a steady veteran who had more experience... and each of those managers went with the young kid and bang... each played in the World Series.

And two of them are Cy Young contenders this year. (OK, the other beat up an elderly man, but that's not important.)

Use the talents properly.

Don't make the mistake Spielberg made.