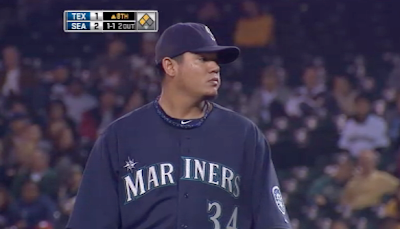 I've been making the case for Felix Hernandez to win the Cy Young Award for about a month now and I have been alone.

Yes he leads the league in a lot of statistics that I don't completely understand...

Win Probability Added... Situational Wins... Base Out Wins Saved... Adjusted Pitching Wins... I am still learning how to quantify them. But King Felix leads all of those categories, which is impressive.

But this isn't just twisting some obscure numbers to make a point (a la the greatness of Colby Rasmus.)

He also leads the league in all sorts of categories that traditional voters drool over.

Not to mention being third in complete games and having the third lowest Walks and Hits per nine inning ratio.

Sounds like a Cy Young front runner to me!

But then people bring up his win total.
"Can we REALLY have a Cy Young winner who only has 12 wins?"

And my response to that is simple.
12 wins? Are you kidding me? He should win the Cy Young BECAUSE he got 12 wins with this God Awful Mariners team!

Now I don't consider wins to be a worthless stat (that IS the objective of the pitcher... to win the game) but it can also be an amazingly misleading stat.

Mitch Williams blew the lead in two beautiful pitched games by Curt Schilling in the 1993 NLCS... and Williams got the win for both games. A casual glance would see Williams having a 2-0 record in the series and Schilling's record being 0-0 and Williams would look like the dominating pitcher.

Harvey Haddix threw 12 perfect innings in a game in 1959, let up a run in the 13th and got the loss. I am going to go out on a limb and say he pitched well enough to get the win in that game.

So Sabathia and the other front runners (David Price, Clay Buchholz, Jon Lester) all play for teams that will win 90 some odd games.

Hernandez's team has ALREADY lost 91 games.
They have only 56 wins all season.

12 by Hernandez.
Yup, that means there have been only 44 wins by the Mariners that WEREN'T Felix Hernandez.

And guess what? He plays for a team that said "We have a solution for the #4 hole! MILTON BRADLEY!"

While Sabathia's team and Price's team flip flop for the title "Best Team in Baseball" Hernandez has to go out each night and say "I hope Franklin Gutierrez and Michael Saunders can drive in a few runs and David Aardsma can hold the lead."

12 wins?
That's only 7 fewer than Sabathia, who has a team that can bring Lance Berkman and Curtis Granderson off the bench in some games. And has Rivera closing games.

That's only 6 fewer than Price who has the likes of Crawford, Longoria and Pena driving in runs and Soriano closing games.

12 wins is a REMARKABLE total when you look at the hand he was dealt!

Here's something to think about...
Hernandez's 12 wins represents roughly 21% of the Mariners wins for the year.

19 wins... the same total that Sabathia has.

So Hernandez IS winning at the same clip as CC Sabathia... he just has a worse supporting cast.