I may not remember Bryan Clutterbuck... but evidently a lot of people DO! 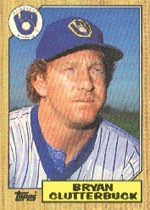 Back in January of 2009, I wrote a quick post about former Brewers pitcher Bryan Clutterbuck.

Basically I was saying how I don't remember him... but who am I kidding. I was basically giggling because his last name sounds like 2 or 3 words that George Carlin would include among the "Seven Words."

But it is funny how that post keeps getting hits, comments and private e mail messages.

Evidently a lot of people know Bryan Clutterbuck... and the consensus is he seems like a terrific guy.

He may not have blazed through the big leagues, but evidently he has been a positive person to people who remember him more than even the most die hard Brewers fans.

He evidently does a lot of charity work and also coaches little leaguers in Michigan.

Sometimes we forget that the men on the baseball cards are actual people... and their brief careers might not get them into Cooperstown, but there are a lot of other small towns where their careers make them memorable.

So good work Bryan Clutterbuck.
I wish that I had your career.

And to honor you, I will post the link to your lone complete game victory in the major leagues.

On April 25, 1989, Brewers manager Tom Trebelhorn gave the ball to Clutterbuck to face the Twins.

Paul Molitor led off the game with a home run for the Brewers... and the offense unloaded on Twins starter Roy Smith who let up 5 runs (and 3 homers) in 4 innings.

He got Jim Dwyer to ground out to second and Clutterbuck went the full 9.