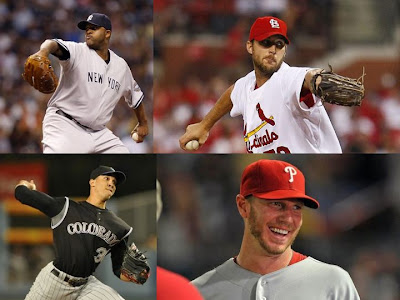 In 2006, when 16 wins was good enough to lead the National League, it seemed like the 20 game winner was going the way of the Dodo and the Liberal Republican.

Now, of course, I know the win total isn't the end all and be all of a pitcher's greatness.
I've been advocating Felix Hernandez to win the Cy Young Award even though his only has a 10-10 record.

And in my plea to put Bert Blyleven in the Hall of Fame I criticized the emphasis on wins when evaluating his career.

That being said, "20 Game Winner" still has a nice ring to it.

It is kind of like "Oscar Winning Director." Now is Ron Howard, who won the Oscar, a better director than Alfred Hitchcock, who never won it? Of course not. But it still looks and sounds cool.

And with September now starting, there are a few legit candidates to win 20 and a few long shots.

And if they ALL come through, then we will see the most 20 game winners since 1920.

With about 30 games left, each of these pitchers will get about 5 or 6 more starts. Some will have to run the table... which is unlikely, but you never know...

Let's break it down and see who is close.


5 More Wins - Currently at 15 wins... May be a reach, but a dazzling September could send them into the Cy Young stratosphere. NOTHING can go wrong.

6 More Wins - Currently at 14... OK, damn near impossible. But if they go on a winning streak and maybe the manager gives them an extra start down the stretch... maybe?

That is 17 potential 20 game winners (some MUCH more likely than others.)

Now there were no 20 game winners last year.
Since the leagues expanded to 3 divisions in 1994, most teams have 5 man rotations, pitch counts and bullpen specialization that cuts down on the big win totals.

Going backwards from last year, here are the number of 20 game winners for each year back to 1994.

Going back even further, here are the last time there were higher numbers of 20 game winners in a season.

You read those names right... two of the condemned 1919 Black Sox were on the list the last time there were 17 twenty game winners!

1920, back when Babe Ruth was a NEW acquisition for the Yankees.

Now are all 17 going to come through.
Probably not... but with pitching taking center stage again, I wouldn't mind seeing a few 20 game winners, even if it isn't the barometer of greatness it used to be.