Don't worry Ty... you'll be out of Baltimore soon enough 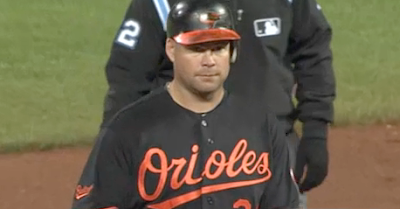 Ty Wigginton looks like he is in Hell.
He's not having a great year but a good year and is obviously trying hard and can play several different positions for the Orioles... a team that as of THIS writing is on on pace to go 43-119... second only to the 1962 Mets for futility in the 162 game era.

Tonight they once again got their brains beat in, 10-2, by the Giants.

THE GIANTS! A team notorious for their lack of offense got 10 runs.

They aren't just losing, they are getting their brains bashed in.

And things can get worse! If they trade away whatever valuable veteran talent they have (like Wigginton) they could indeed give the original Mets a run for their money.

And Orioles fans take heart. Maybe there is another Bryce Harper or Stephen Strasburg in the 2011 draft. You guys are picking first!