Beating a dead horse... you are nuts if you are against Interleague Pleay

The Red Sox and Rockies are squaring off...
The Rox beat the Sox in a thriller last night in their match up since the 2007 World Series, and the Rockies got revenge on Jon Lester, who won the clinching game in in '07, by beating him and also on World Series MVP Mike Lowell who was retired for the last out.

The Sox offense will probably come back in the thin air and deep power alleys of Coors Field. 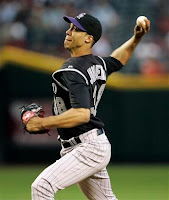 But on the mound tonight for Colorado is Ubaldo Jimenez.

He's having a mind boggling first half of the season and is the Cy Young front runner.

Shouldn't the Cy Young winner have to face all the best teams in the game? The Red Sox have the second most wins in the big leagues and Jimenez is facing them while they are hot, last night's loss not withstanding.

And he could be getting revenge for Game 2 of the 2007 World Series... a game where Jimenez pitched and actually had the lead for a few innings before the Sox clawed a pair of runs off of him to get the lead and the win.

You don't get this match up in a regular season game without Interleague Play.
There isn't this kind of intrigue about a late June game if it were two contending teams in the same league.

And yet some lunatics will still say it should be abolished.

And THIS lunatic will continue pointing out how insane that point of view is.
I don't care if the horse is dead. Give me that whip!