What is harder to figure out? Dice-K or the plot of Mulholland Drive 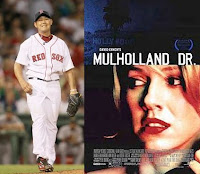 It's hard to make the call either way. With both, every time I think I have it figured out, something totally f---ed up comes along.

With Dice-K it is "Oh he's done... no wait he looks good again... oh he'll always let up the one big innings... HOLY CRAP he nearly threw a no hitter... oh wait he's walking the ballpark."

So today he let's up 3 runs early then holds on for the win... and walks NOBODY!

I compared him to Derek Lowe earlier, but the David Lynch film is more apt.

I think I am following the plot... the hot dark haired girl has amnesia while Naomi Watts is a rube from Canada... then there is the mob... and that cowboy... and there is a super creepy guy behind a dumpster... and some hitman shoots the wrong person... and a dead body is found... then the next you know Naomi Watts IS the dead girl and everyone has different names?

Oh screw it I can't figure it out.

Which one is following a clearer progression? When you figure it out, call me. Chances are I'll have lost MY identity too.

Never mind films from 10 years ago! Let's update the tally.

Day Game today (lucky for the Sox. With the Celtics playing today, there would be no eyes in Fenway.)

Wakes is pitching with house money as the series has already been won. Then off to Baltimore, where the Orioles have been easy to figure out.