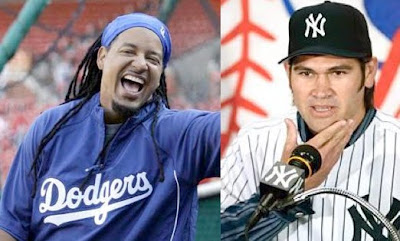 When I wrote about how I would give Manny Ramirez an ovation if I were at Fenway (and I do cheer for Manny when I go the six miles from my house to Dodger Stadium) I got some people asking me privately (and someone asked on the site) would I also cheer for Johnny Damon.

Of course.
Both Manny and Johnny were big parts of the 2004 team that all of us Red Sox fans waited our whole lives for. And the make up of the 2004 team was NOT a bunch of home grown Red Sox who all played together in Pawtucket. The 1975, 1978 and 1986 Red Sox teams were primarily home grown.

With the exception of Youk, Nixon, Varitek and Lowe, none of them spent their rookie years with the Red Sox. And even Varitek and Lowe were actually originally drafted by Seattle.

Most of the 2004 squad were picked up from other teams and assembled like a baseball answer to The Dirty Dozen, slapped together for a crazy mission to reverse the curse.

So it is disingenuous to get mad when a mercenary leaves for more money. Pedro, Damon, Manny, Foulke, Schilling et al came to the Red Sox via free agency or forced trades to make dough.

When Pedro signed with the Mets, Damon signed with the Yankees and Manny forced the deal to LA, they were doing to us what they did to the Expos, A's and Indians before coming to Fenway.

But there are a few guys who test that theory... and it isn't Manny nor Damon.

There are 4 guys who at first make me want to boo... then I have to stop and say "But they helped the Sox win a ring" and reluctantly say "Oh alright. I won't boo."

He always felt like a Yankee mole, didn't he? I still remember him being on the mound in 1999, clinching the ALCS. (No offense to El Duque, but Mendoza should have been the MVP of the 1999 ALCS.)

He was a big pile of "eh" in his 2 seasons in Boston, compiling a combined 5.73 over 2003 and 2004. And he was the last Red Sox pitcher to record a loss in 2004, getting the decision in the 19-8 Game 3 Fiasco... against the Yankees. It was the last game he pitched in a Red Sox uniform and the Sox went 8-0 the rest of the way. I admit it looked odd seeing his celebrate with the other Red Sox at Yankee Stadium after Game 7. When he received his ring the next season, he was a member of the Yankees again.

I never trusted him. But I can't boo him. 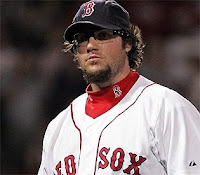 He was supposed to be the pick up that solidified the bullpen and made the World Series a lock. Instead he became the 800 pound gorilla reliever and the very symbol of how badly someone could suck when they get off the juice.

By the time the playoffs came about, he was banished to mop up duty. The only time he pitched in a close game, it was Game 2 of the 2007 ALCS which he of course lost.

The only two positive things about Gagne's Red Sox stay were his closing out the Division Series (in a mercy move by Tito) and this song inspired by his time in Boston.

I'm not being snarky. I am sure he MUST have got a batter out. But I don't remember it. It seemed like all of his appearances were listed in the Box Score as 0 IP, faced 2 batters.

When he came into the game, you just KNEW that Tito was going to relieve him before the inning was over. You KNEW that the rally was going to continue.

He was tough to root for... and I bid him farewell last year. As poorly as he pitched, I can't boo him. 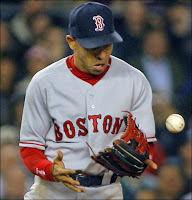 Oh boy this is the ultimate litmus test. This guy was TOUGH to root for. Not only was he obscenely overpaid ($36 million for a guy who lost his starting job with the Dodgers) but was BRUTAL in the field and had an 0-33 stretch at the plate.

Someday we'll learn what Orlando Cabrera did to tick off the Red Sox front office. But until then, Sox fans will all be scratching our collective heads wondering why he couldn't stay instead of shelling out tons of money for Edgar Renteria and Julio Lugo.

But he won a ring with the Sox (and made a few nice plays in the World Series.) Swallow hard... I can't boo him.

And folks, if I refrain from booing those guys, then I think I can find it in myself to cheer some of the heroes of the '04 and '07 titles.