Should the Yankees trade Joba Chamberlain for Franklin Morales?

I think it is a trade worth considering.

Now Yankee fans reading this who think this is an awful deal, remember I am not talking about the Joba Chamberlain that everyone projected he would be.

I am talking about what Joba actually IS.

The debate over Joba has died down... there are no longer people saying he is an ace pitcher who should be in the rotation. And the people saying "He's a dominating closer and Mariano's heir apparent."

The Yankees needed a #4 starter last post season and were going to turn to Chad Gaudin because Joba couldn't cut it as a starter.

This year when the Yankees needs are listed, bullpen depth is always at the forefront. Joba isn't even a mediocre reliever this year. His ERA is a big fat 5.29 and he can't be trusted in big games.

I wrote last March that the Yankees should deal Joba out of mercy to get him out of the circus.

The Yankees had a talented pitcher and because of the Joba rules, spectacular indecision, media scrutiny and incompetence, created a formula for failure that would be the envy of Bialystock and Bloom.

Next year he'll be 25... and if he is still a lousy reliever and an ineffective starter then he might have little to no trade value.

A few years ago, he could have fetched Johan Santana. If he keeps this up, he couldn't get Carlos Santana.

At this point in a less stressful environment might have him flourish. But a few more years of being neither a good starter nor reliever and I might have to include him on my "Can't Miss Aces Who Missed" list.

Which brings us to Morales. 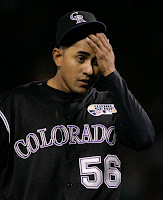 Franklin Morales' tenure with the Colorado Rockies can best be summed up in his grotesque 5th inning of Game 1 of the 2007 World Series.

With the Rockies already down 5-1, Morales came into the 5th inning to replace starter Jeff Francis. Joe Buck and Tim McCarver began gushing about how talented he was and that he was a budding ace.

And in 2/3 of an inning, he let up 6 hits, gave up a walk, and committed a balk. All 7 base runners came home for earned runs and the Rockies were sunk.

He was listed as one of Baseball America's top 10 prospects in all of baseball before the 2008 season. But his record as a starter has been awful and the Rockies attempt to make him the closer have back fired as well.

Like Joba he came into baseball in 2007. Like Joba he has playoff and World Series experience that isn't pretty. Like Joba he's been shifted back and forth from the rotation to the pen.

Like Joba he is 24 years old but running out of chances with his home team.

Joba is a big right hander who has been shriveling in the glare of the spotlight in New York.
Morales is a slight left hander who could benefit of getting out of Coors and pitching with some run support and a steady closer behind him.

Maybe they should switch places.

Maybe a lower key baseball environment like Denver could be the perfect place for the big kid from Nebraska with the Star Wars first name.

Maybe being among superstars and having a fresh start is just what the left hander from Venezuela needs.

Each fan base was expecting stardom from these arms and both have come up short.

Why not swap places and see what happens?
How can it be worse than driving their careers into the ground?