Armando Galarraga should be the S.I. Sportsman of the Year 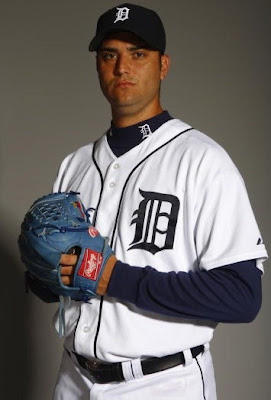 Or perhaps Phil Mickelson's Masters win will get people all weepy.

But how could there be a better example of class, excellence and sportsmanship than what Galarraga displayed over the last few days?

He showed excellence with the perfect game... and then overwhelming calm when the call was blown, and he just gave a laugh. 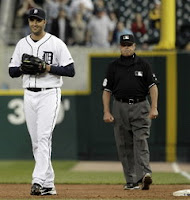 That night he had the dignity to comfort umpire Jim Joyce after the game.

And then came the next day. Everyone screaming bloody murder. I wrote about 4,392 blog posts about it.

Columnists wrote about it.

Bud Selig mulled over it!

A regular season game between Detroit and Cleveland overshadowed Game 1 of the NBA Finals between Boston and Los Angeles!

Even the White House referenced it!

And how did Galarraga, the man who was denied immortality, handle it? 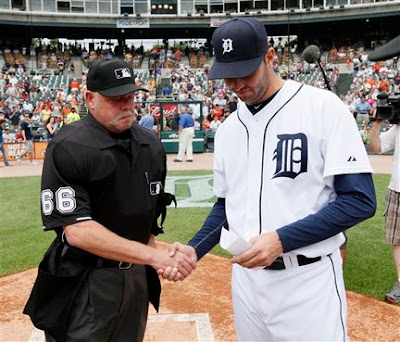 Less than 18 hours after it happened and tempers simmering, he brought the line up card out to the visibly distraught Jim Joyce, shook his hand, gave him a pat on the back and it was a new day.

Try watching that clip and not get choked up.

You tell me there isn't a Little League coach or a Pop Warner, YMCA basketball league or youth hockey coach in the world worth their weight who wouldn't want their players showing that kind of sportsmanship!

When everyone talks about the selfishness of the athlete and how nobody can relate to them and how they are a bunch of spoiled cry babies, along comes Armando Galaragga. The guy who had every reason to bitch and moan showed set the new standard for playing it cool.

The S.I. Sportsman of the Year is supposed to honor not only those who play the best on the field, but dignify the sporting world (you know, like past honorees Pete Rose, Mark McGwire and Sammy Sosa.)

Galaragga's class is something that should not just be swept under the carpet.

In an odd way, for Galaragga's legacy, the blown call was the best thing that happened to him.

Sure Dallas Braden and Roy Halladay got their moment in the sun from baseball fans. But my in box and Facebook page was filled to gills with messages from friends of mine who don't even follow baseball.

My wife even said "Now I have faith again in that stupid game."

He even got a Corvette out of it.

Give him the Award. And when future generations ask "Why was the Tigers #3 starter the Sportsman of the Year?" they can learn a little bit about class.

And hopefully by then, those kids will ask "But didn't they have instant replay then like now?"