Up is down... Black is white... The Mets are contending 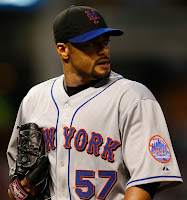 Here is a series of possible and not improbable events that could happen tomorrow.

Mets rookie Jonathon Niese, coming off a 1 hit shut out in his last start, beats the Indians, one of the worst teams in the American League.

Tampa Bay and the Yankees, the teams with the best records in baseball, win their respective games against Atlanta and Philadelphia.

What would happen if that not exactly outlandish collection of results come true?

The Mets would be alone in First Place in mid June.
And the Phillies would be only 1 game over .500.

I still don't understand how this is happening. And call me crazy, but I'm still not buying the Mets nor would I sell the Phillies.

But holy cow! It's not April anymore... It's not May. We're a month from the All Star break and the team that I compared to a car wreck and two girls one cup has a punchers chance of being in first place in July.

I've been screaming for this team to dismantle. I kind of still think they should.

But then there are the group of imposters wearing Phillies uniforms who can't even win on Roy Halladay' starts anymore.

The one team I thought for sure was going to the playoffs, the Phils, are barely holding their nose above break even while the Mets and the Padres, two teams that I thought had no chance, are in the thick of it.

I have no clue how the Mets are doing it which is why I still think they'll collapse and the Phillies when the dust all settles, will be playing in October.

Then again I thought Tampa was going to fold in 2008.

The world is upside down.