An open letter to Ozzie Guillen 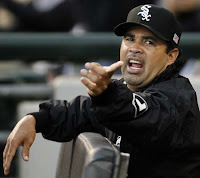 You need to RELAX a little. Not too much… but people are already writing that you may have worn out your welcome in Chicago, and we can’t have that happen.

I know there are a lot of people in baseball who are NOT Ozzie Guillen fans and think you are a disgrace to baseball.

I am not one of them.

I am a big Ozzie Guillen fan. I think you are great for the game. Yes we need to stoic classy manager types like Joe Torre, Mike Scioscia and Terry Francona.

We need the crotchety old men who will bark at an umpire to death like Bobby Cox and Jim Leyland.

We need the cerebral managers like Ron Gardenhire and Joe Maddon.

We need the former players who manage on instinct like Bruce Bochy and Dusty Baker.

And yes, we need the managers who very well might be insane.

That’s where you fit in… even more than your crosstown rival Lou Piniella, who is bonkers as well.

But you need to tone it down… at least to the point where you and Kenny Williams are no longer trying to fight each other!

Ease up on the Twitters and tell your son to do the same.

Have the colorful quotes and push your players hard… but have SOME self preservation.

Think about the amazing legacy you can leave behind in Chicago.
You lead the White Sox to the only World Series title the city has seen in the past 93 years.

But it was more than just a World Series title… it was something very unique. 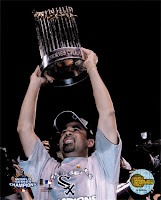 Your White Sox were the best team of the regular 2005 season and went 11-1 in the post season… a mark achieved only by the 1999 Yankees in the 3 tiered playoff system. And THAT team had future Hall of Famers like Derek Jeter, Mariano Rivera and pending steroid backlash, Roger Clemens. Not to mention stars like Bernie Williams, Paul O’Neill, David Cone, Andy Pettitte et al.

Who were the Hall of Famers on the 2005 team?
Frank Thomas?
Yeah he was on the team but only played 34 games and none after July 20th. He wasn’t on the playoff roster.

But the rest of the team was filled with good players but nobody who would even crack the top 5 in the MVP vote nor get any first place votes for the Cy Young Award.

This was a manager’s championship.

Assuming that the likes of Paul Konerko or Scott Podsednik don’t make it to the Hall of Fame, the 2005 World Series title has a very significant uniqueness to it.

The 1981 and 1988 Los Angeles Dodgers, who had a Hall of Fame manager in Tommy Lasorda.

The 1984 Detroit Tigers, who had a Hall of Fame manager in Sparky Anderson.

The 1997 Florida Marlins (assuming Gary Sheffield DOESN’T make the Hall of Fame) who had a potential Hall of Fame manager in Jim Leyland.

The 2002 Anaheim Angels whose manager, Mike Scioscia, is building quite a resume.

The 2008 Philadelphia Phillies, where it is too early to determine the Cooperstown prospects for Ryan Howard, Chase Utley, Jimmy Rollins and evidently Jamie Moyer.

That’s 7 World Series out of 105 where there was no Hall of Fame prescience in the active line up or rotation… which means 7 extra ordinary managerial displays.

Now I am not saying you are a Hall of Famer… But you have the World Series and another Division Title on your resume in your seven years managing the White Sox. Win another pennant and some more division titles and maybe you’ll get some consideration.

Plus by the time the White Sox have put another pennant contender they will have almost an entirely different team from 2005… so Ozzie could have a two distinct White Sox pennant contenders, a la Lasorda in 1981 and 1988 with the Dodgers.

Maybe the Hall of Fame right now is a reach, but take a look at the outfield wall in U.S. Cellular Field.

They honor White Sox legends out there. Nellie Fox, Luke Appling, Minnie Minoso, Luis Aparcio, Carlton Fisk, Ted Lyons and Billy Pierce are all immortalized and none of THEM delivered a World Series title. 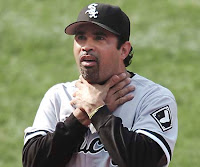 Heck you might even get a statue… and have it in that choking position.

You can have a permanent place of adoration in the city of Chicago.

Just don’t self destruct. Don’t have what happened to Billy Martin happen to you. He could have been the Yankee manager for life… or the A’s manager for life for that matter. But he let his demons get the best of him at each turn.

And yes, even with a World Series title you can go unemployed for a long time. Don’t believe me? Ask Cito Gaston.

So seriously… be intense and be Ozzie.
You can be one of the great figures in White Sox history!

Just don’t go out as a joke.