Is the pitching getting better or is it just me? 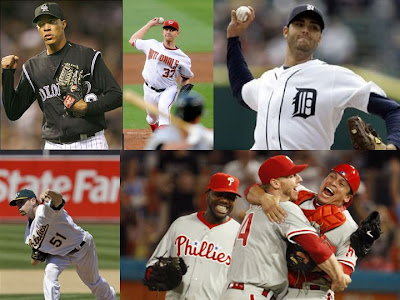 2010 has already had some extraordinarily special pitching moments and we're not even in mid June.

Either the steroid era is really over or the pitchers are on something.
And it's great for baseball in my opinion.

We have had Ubaldo Jimenez throwing a no hitter and putting up numbers that would be eye popping in a pitchers park let alone the zero G of Coors Field.

We have had Dallas Braden throwing a perfect game on Mother's Day (and seeing his grandmother trash talk A-Rod to boot!)

We had Roy Halladay throwing a perfect game in Miami.

We had the Armando Galarraga spoiled perfect game.

We had Daisuke Matsuzaka nearly throw a no hitter.

We had ancient Jamie Moyer throwing a shutout.

Not to mention Dallas Braden, Jonathan Sanchez, CC Sabathia and Clay Buccholz are all taking the hill as well.

Look, I know the home run is sexy and there is a sense that most fans just want to see a slugfest... but I don't believe that.

I think that if you get a dominating pitcher facing a kick ass hitter, it makes for a confrontation unlike any in sport.

How exciting is a home run into the upper deck when the pitcher is a scrub just up from AAA, or a middle reliever who barely has a job, or Kyle Farnsworth?

Maybe this IS the end of the steroid era for hitters... the slugger happy AL hasn't seen a 40 home run hitter since A-Rod's 54 taters in 2007.

And perhaps when someone says "they are a 30 home run hitter" or "they are good for 95-100 RBI" it won't sound like they are describing a platoon reserve shortstop.

Maybe we can expect some real dominating pitching. Maybe all the nonsense that we'll never see another 300 game winner can end.

Maybe games will move quicker. Maybe runs will be at a premium and when a team falls behind by a few runs, it will make the game more tense instead of having everyone think "Ah don't worry... this will be a 9-8 game by the end."

It's as if they are playing BASEBALL and not just playing home run derby!

What a novel concept!