In honor of Loscy and Cowens... 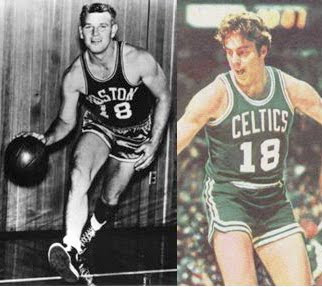 Jim Loscutoff was one of the stars of the first Celtics team to beat the Lakers in 1959 (when they were still in Minneapolis.) He helped the Celtics win seven (count 'em! SEVEN) NBA Titles including the L.A. Lakers twice.

He was a favorite in Boston but Loscy, a graduate of Palo Alto High School (where my brother went to high school), didn't want his number retired.

His number was picked up by Big Red, Dave Cowens, who took the baton from Russell and led the Celtics to two titles in the 1970s.

He also runs the Dave Cowens Basketball School, which when I was a kid was in my hometown of Weston Massachusetts. (I went there for a few summers and confirmed that I had ZERO basketball ability.)

And now the Celtics are a win away from making 18 significant in yet another way. 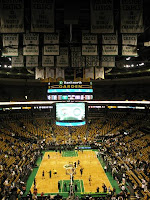 There are 17 Celtic championship banners hanging from the rafters.

All the Celtics need is one win in Los Angeles and there would be #18... the Loscy and Cowens banner.

And oh yeah... it would keep the Lakers from gaining on the Celtics in total titles.

I want them at arm's length.

I am not going to gloat about tonight's game or talk about how much fun it will be listening to L.A. sports talk radio tomorrow (tee hee) or reading Bill Plaschke inevitable doom and gloom column tomorrow.

I just want one more win for the Celtics... in honor of Loscy and Cowens. 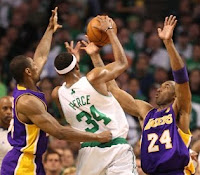