You want to know the problem with the Red Sox of the early 1980s was? 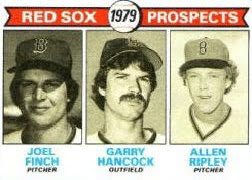 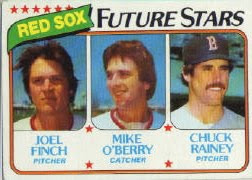 I mean besides the fact that Don Zimmer was the manager...

THESE were our future stars!
Not exactly a Cooperstown bound roll call here?

The immortal Joel Finch was featured on BOTH cards... which was ironic because he only pitched in one season in the bigs. 1979. He went 0-3 with a 4.87 ERA. He actually pitched well in a few games, but a few bad outings butchered his ERA. (Letting up 5 runs in 1/3 of an innings like he did on July 23rd will do that.)

Garry Hancock hit for decent power and a high average for Pawtucket in 1978 and 1979 and when Fred Lynn went down to inuries in 1980, Hancock became the starting center fielder. Maybe the front office thought he could replace Lynn when they dealt Freddie to the Angels before the 1981 season. It didn't happen. Injuries and ineffectiveness limited him to 37 games and a .112 average for 1981 and 1982 combined before he was traded to Oakland.

Allen Ripley kept putting up double digit win totals with low ERAs in the minors and the Norwood, Massachusetts native looked like he would fill in perfectly for the departed Bill Lee, Luis Tiant and Fergie Jenkins. It never worked out and he was dealt to the Giants after the 1979 season.

Mike O'Berry is one of the most obscure potential Carlton Fisk replacements ever... and in a sea of Bob Montgomeries, Gary Allensons, Fred Kendalls and Dave Raders, that's saying something! O'Berry was actually a lousy hitter in the minor leagues, hitting around .200 or worse at each level. He must have called a good game to be considered a future star. He hit .169 in 43 games for the Sox in 1979. The Future Star card came out in 1980. By the time I opened that pack, he was already sent packing to the Cubs. We wound up playing for 6 teams in 7 seasons.

Chuck Rainey looked pretty good in 1979 and the rotation needed some young blood. But injuries got the better of him and after the 1982 season he was dealt away to the Cubs. In my 83 Fleer Guy post, I pointed out that Chuck Rainey was rubbing a baseball on his crotch in his picture.

So there you have it! The Haywood Sullivan/Buddy LeRoux run farm system calls this a bumper crop.

Add that to the genius of Don Zimmer in the dugout and you have an idea how a team loaded with superstars and future Hall of Famers kept falling short.

You can't blame EVERYTHING on Bucky Dent!