Did you know there was ANOTHER huge debut tonight? 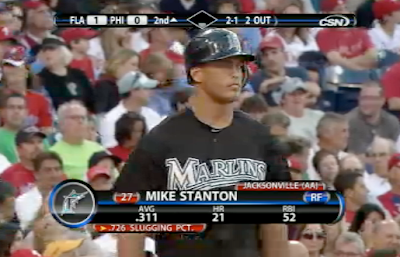 It's not the same thunderous debut as Strasburg but the Marlins just added a potential impact bat to their lineup in Mike Stanton.

In his first at bat he got an infield single and then scored on a double.

If he becomes a true big league slugger then who knows?
He might make former Braves/Red Sox/Rangers/Yankees/Mets/Nationals/Giants/Reds reliever the OTHER Mike Stanton.

Heck he should come out of retirement just to face Mike Stanton!

Well, the Marlins Mike Stanton needs to win 3 World Series titles and get selected to an All Star team if he wants to have Mike Stanton bragging rights.