The Juan Samuel Era gets its first highlight 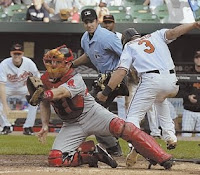 When Dustin Pedroia tied the game today with 1 out in the 9th inning, I had a big grin on.

There was NO WAY the Red Sox were going to lose this. Granted, it won't be the laugher that the first two games against Baltimore were... but come on!

These Orioles are on a pace to be the worst in their franchise's history, including their days as the Browns. But McDonald was left on second in the 11th and Izturis scored in the bottom of the 11th... and Juan Samuel has himself a victory as a manager.

Good for him. Bad for the Sox. Normally I would be content with 2 of 3 from a team on the road... but man these Orioles are REALLY bad and this was one for the taking.

Now it is just one to grind teeth to.

Down to +2
Off to Cleveland and maybe a chance to chip away at the Yankee wild card lead.

Thank Goodness for the Celtics tonight