I am still not buying the Texas Rangers 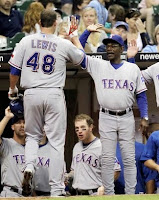 The Texas Rangers have won 11 of their last 12 games and currently have a 3 1/2 game lead in the AL West, which is the biggest lead of any of the Division Leaders.

They just finished an 8-1 roadtrip and everything is firing on all cylinders.

Only the Yankees, Rays, Red Sox and Braves have more wins.

This is looking like October could be played Deep In The Heart of Texas!

You will forgive me if I am not preparing a parade for the Rangers just now. Don't think less of me for throwing cold water on Ranger fan's enthusiasm.

Well first of all, isn't this the story of the Texas Rangers? Fast starts, contention into the late Spring and Early Summer only to fade away? 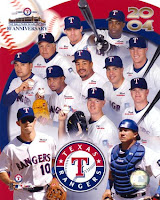 In 2004 they were 4 1/2 in front in July and on first place in early August, but after an 8 game winning streak in August brought them to within 1/2 a game of Oakland, they finished the season 20-21.

I could keep going...

Besides the teams of the last decade, the Rangers have had a history of teams that have wilted away after the All Star Break.

Why is this so consistent in Texas?

No matter if they have Richie Zisk or Jim Sundberg or Ruben Sierra and Oddibe McDowell or Mark Teixeira and Michael Young... no matter if they played in Arlington Stadium or the Ballpark in Arlington... they wither in the Texas heat. Specifically the pitching staff tends to fall apart. 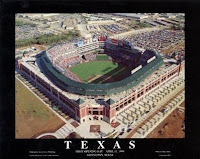 And yet the Astros have been able to put together great pitching staffs in the desert as have the Diamondbacks... which gets to the root of the problem.

Or more appropriately the ROOF of the problem.

When the Rangers spent $191 million to build a new ballpark, they got a beauty from HKS Inc, David M. Schwarz Architectural Services. But they forgot to put a roof on it.

And every year, with the exception of the three division title seasons where they took advantage of a weak AL West (although the 1999 team was a good squad) the Rangers stayed home in October despite having, as I showed in the Home Grown vs. Acquired Series, a TON of MVP and Hall of Fame caliber talent come through their franchise.

And they are the only franchise to have never won a post season series. Hell, they've won only one post season GAME!

And I can't help think that if they were playing under a roof, then the balls wouldn't be flying out as much on a summer night's game. Pitchers wouldn't be gasping for air as they walk out of the bullpen. And maybe the Rangers would have a few more memorable moments than the Nolan Ryan no hitters and the ball bouncing off of Canseco's head.

The ballpark cost under $200 million and the A-Rod contract cost $250 million. The Rangers would have been better off spending that money on a roof!

Until then, I am just waiting for the collapse.

I have history on my side.