Sully Baseball Suggests OTHER VENUES FOR THE PHILLIES-BLUE JAYS SERIES 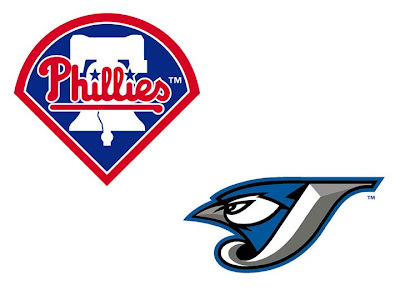 So the Phillies/Blue Jays game that was scheduled for Toronto this weekend has been moved to Philadelphia because of the G20 Summit.

Look, I know it is probably harder than it looks to create the schedule, but are you telling me NOBODY noticed that there was going to be massive security problems in Toronto this weekend?

In baseball's infinite wisdom they decided to move the series to Philadelphia and count it as a home game for the Blue Jays.

Now Toronto gets the money at the gate, but the Phillies get the concessions, parking, T shirts and Toronto misses out on the return of Roy Halladay.

It's not fair I say and I think baseball could have found a neutral site for this game to be played.

And the staff at Sully Baseball have come up with some alternate locations that would have made it a little more ever for both squads.

La Stade Olympique - Montreal.
It's just sitting there, looking like the Starship Enterprise, in the middle of a big field in Montreal. Play it there. And you get to have a series in Canada!

Sure the stands will be empty and the few fans there will be apathetic thinking "What's the point? This team isn't staying."

But how will that be different than the last bunch of years for the Expos?

Miller Park - Milwaukee.
Isn't that Bud Selig's go to "in case of emergency" plan? Send them to Milwaukee?

Sure the Brewers are playing there this weekend. Have it as a double header! See the Brewers and Mariners in the day, Blue Jays and the Phillies at night!

Keyspan Park - Brooklyn.
Bring big league baseball back to Brooklyn for at least one weekend!

Sure it will be a stretch to call the Blue Jays the home team here... but with all the Mets fans in Brooklyn, the Phillies will DAMN SURE feel like the visitors!

Doubleday Field - Cooperstown, NY.
I have been advocating playing an honest to goodness counts in the standings game in Cooperstown for years.

Why not now? It's close enough to Canada to have a few people come down and it would be a nice weekend trip to the Hall of Fame and see a big league game while the weather is still nice in Upstate New York.

Estadio Latinoamericano - Havana, Cuba.
A global summit is happening in Canada. And someday Cuba will be opened up and asked to rejoin the economies of the world.

Wouldn't a ballgame in their grandest ballpark be the first step? And maybe the Blue Jays and Phillies could smuggle some of their star players out with them!

Nelson Mandela Bay Stadium - Port Elizabeth, South Africa.
Sure everyone is going bonkers over the World Cup in South Africa, but while they are thinking about sports, we can help introduce a little hardball there as well!

Although there is no avoiding the vuvuzelas there!

Stade de Geneve - Lancy in the Swiss Canton of Geneva.

If we need a neutral site, who is more neutral than Switzerland?

My family actually lived in the Swiss canton of Geneva when I was in the 3rd and 4th grade and when I lived there I played little league with the other transplanted American kids. Trust me, there are enough Americans living in Geneva to make it a packed house. 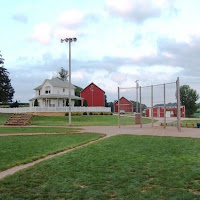 The Cornfield in Field of Dreams - Dyersville, Iowa

Hey, it was good enough for one of the best baseball movies ever... and evidently it is up for sale. If the field is going to fade away like Shoeless Joe walking back into the corn, it would be nice to play a real honest to goodness ballgame there.

Are you worried about attendance?