Gee Whiz... I wonder what the mood at Fenway will be like tomorrow 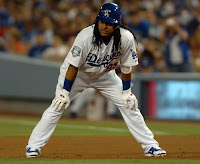 Everyone in Boston is already pissed off that the Lakers came from behind and bounced the Celtics.

Now ANOTHER Los Angeles team is going to show up.

I bet if an L.A. team arrived and featured Carlton Fisk, Yaz, Larry Bird and the remains of Paul Revere, they'd still get booed.

And this one has Manny Ramirez.

Now I know this is not the popular opinion for Sox fans, but I would applaud Manny.
We all waited our whole lives for that 2004 World Series title and when we got it, Manny was a big reason for its delivery.

I have a feeling not a lot of Sox fans have that rule.

It should be fun.