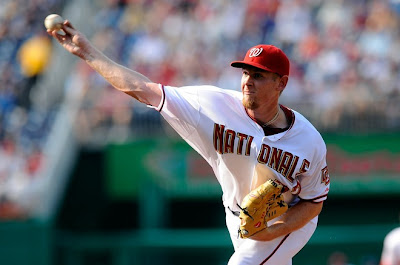 I am actually dead serious when I say that.

It makes all the sense in the world for the Nats in 2010. Strasburg is the face of the franchise. He's the only reason anyone gives a damn about the Nationals.

Oh yeah they are doing better than they were last year and the year before... but those were years they lost 103 and 102 games. They were able to draft Bryce Harper and Stephen Strasburg because they were monumentally dreadful.

And yeah they are the best team in the Beltway, but that's because the Orioles are on pace to go 43-119.

People watch the Nats because of Strasburg and that's it!
So the Nationals are understandably going to be cautious to not wreck their prized arm (see Prior, Mark.) So they will probably set him on an innings limit.

But while the Nationals don't want to kill the Golden Goose, they also want to cash in some of those golden eggs!

Today there were nearly 40,000 on a Wednesday afternoon to see him pitch. The team normally draws about 20,000 to a game, often less. But they just about double that number when Strasburg is on the bump.

And I bet that most of the fans left Nationals Park happy today even though their team lost.

The fans were buzzing and a park that last year would be lucky to draw 12,000 on a weekday afternoon pulled in 3 times that.

Which brings me to my original thought.

When the Nationals go on the road... don't pitch Strasburg!

Shut him down then. You limit his innings. He gets 6 or 7 days off.
In one stretch between July 16th and July 25th, he will have 10 games where he has off.

Then, right now, you announce that he will pitch the first game of every homestand.

And watch the advance ticket sales go up.
People want to see him live. People know this is an extraordinary pitcher and so far he has been delivering the goods better than anyone thought he would... and people are clearly going to pay to see him.

So why have Baltimore, or the Mets, or the Marlins, or the Braves or the Diamondbacks make dough off of this.

The Nationals can build up a fan base this way... going to the games can become an event and something that the fans can share.

I know it sounds like I am joking, but how does this not make sense?

It makes sense to me!