I hope Bryce Harper works out but... 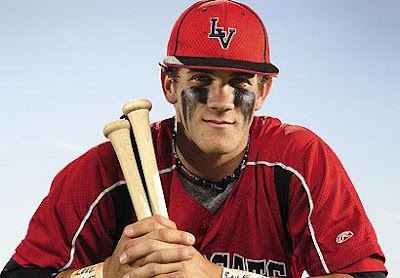 If he flops, this whole Once Were Warriors war paint thing with his eye black will really come back to haunt him and make him look silly.

But I do hope he is all that he is advertised to be.

Having superstars in a market like Washington would be good for the game (if bad for the Orioles.)

But who knows what just happened in this draft?

The Red Sox drafted a hitter named Bryce Brentz.
Is he any good? Will he be a big leaguer?
Will he be the second best Bryce in the draft?

I don't know and neither do you?

A few years ago Red Sox fans were told Craig Hansen was going to be a great closer. Now he can't even make the Pirates team.

Will Jameson Taillon or Manny Machado be any good?
Or will people laugh at the Pirates and Orioles, knowing they could have drafted Peter Tago?

We'll not know for a few years how anyone, including the Nationals, will do.

But I find it interesting Houston drafted Delino Deshields Jr.
I must be old becaue I remember when DeLino Deshields was a promising prospect... not a father of a pro player.

(I wonder if someone will trade one of Pedro Martinez's kids for DeLino Deshields Jr?")