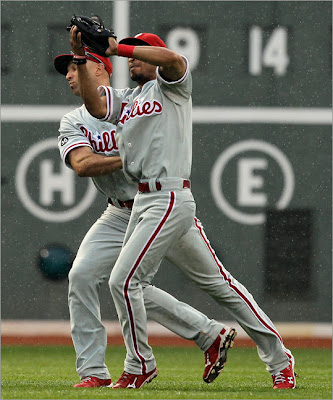 As I wrote earlier, only morons criticize Interleague play.
I don't always respect other people's arguments and opinions if their arguments and opinions are baseless.
I don't respect Intelligent Design supporters. I don't respect the Birther movement. I don't respect the people who say Interleague Play is bad for baseball.
And among the argument flung at me like a simian tossing their waste was how unfair it is. "The Yankees get to play the Astros but the Red Sox have to play the Phillies. IT'S NOT FAIR!"
Well here's a way to counter act that injustice... just like the Sox did in May... WIN THE GAMES!
The Sox took have taken 4 out of 5 from the Phillies so far this year and will look to make it 5 of 6 tomorrow.
It's so unfair... for the PHILLIES.
Nonsense.
Complete and utter nonsense.