Did you see the end of the hockey game tonight? It was a great game and it had a peculiar but eye opening ending…

The Flyers sent it into overtime with a late goal in the third period. Philadelphia was going bananas. But then Patrick Kane shot one past Flyer Goalie Michael Leighton… and only one person on the planet Earth saw it was a Stanley Cup winning goal: Kane.

It wasn’t clear to the announcers, the refs nor the Flyers. Kane went down the ice yelling like a madman and his Blackhawk teammates followed suit. But nobody was 100% sure.

Then the replay showed clearly it was a goal. The refs checked it and confirmed it. There was no doubt. The Chicago Blackhawks had won their first Stanley Cup since 1961. 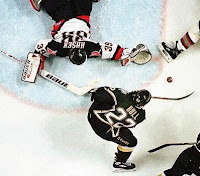 Contrast that with 1999 Final game. Buffalo scrambling to stay alive at home and force a 7th game. They went into 3 Overtimes and each team left their hearts and guts on the ice. Then Brett Hull crossed the crease and scored off of Domiik Hasek. There was no video review right away and the Stars celebrated the Cup victory, Buffalo was enraged and to this day there is a lack of satisfaction regarding one of the best hockey games you and I will ever see.

And why? Because we all saw one thing and yet the officials on the ice ruled differently from reality.

Taking the time to review Kane’s goal last night will be long forgotten. What will be remembered is it won the Cup and there isn’t a Philadelphia fan who can disagree with that.

And afterwards, one of the best traditions in sport unfolded… the presentation of the Stanley Cup.

You see folks! You can HAVE replay and also have your traditions.

One doesn’t destroy the other.

Chew on that and congrats to the Blackhawks. (It takes the sting out of them eliminating my Sharks.)