See you in 4 years, Soccer 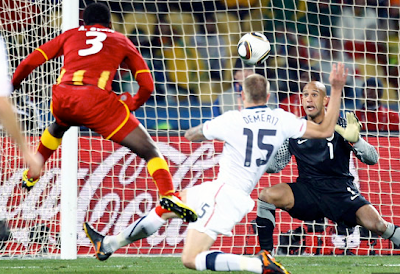 I watched the second half and the extra time of the World Cup game between the USA and Ghana.

It was exciting and I was indeed rooting for team USA (it's about time someone knocks Ghana down a peg or two!)

And while the overtime rules confused me (wait, there are TWO over time periods?) I felt bad for the USA players when it was done.

And I REALLY felt bad for the ESPN and ABC execs who are still in South Africa wondering how low the World Cup ratings in America will be from this point forward.

That's it for American soccer interest until the 2014 World Cup in Brazil when we will all be told that THIS is the year that Americans will get hooked on soccer.

It's not happening... We love skiing and curling every 4 years as well.
Without rehashing all of my previous arguments, I will just prove to you that the MLS in America is a second rate minor league.

Today while the World Cup was playing in South Africa and the best players in the world (including the best American players) were passionately focusing on the same prize... the MLS had teams playing.

Today the New York Red Bulls were playing the Kansas City Wizards... and there were other games as well.

So you KNOW the players playing in those games were the players by definition not good enough to play for the World Cup teams.

It's a fringe sport here.

Call us in 4 years and we'll get excited again.