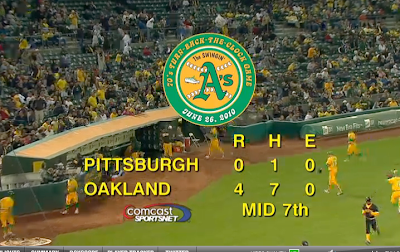 I am guessing most of you didn't catch the A's - Pirates game last night. It's a shame, because while the game itself wasn't exactly suspenseful, the look and feel of the game was, let's face it, OUT OF SIGHT!

It was turn back the clock to the 1970s night in Oakland. And the Pirates and the A's both would love turn it back to that decade when (and brace yourself young fans, this is going to sound strange) BOTH teams were powerhouses and won multiple division titles and World Series Championships.

The A's were decked out in their classic yellow bottoms and yellow tops from the 70s glory days.

Personally I preferred the green tops to the yellow tops but it doesn't matter. 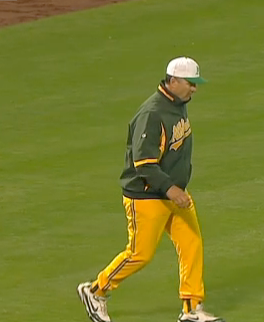 And like it was in the 1970s, the manager and coaches wore the white hats.

Bob Geren might not be a Hall of Fame manager, but for at least a day he LOOKED like Dick Williams!

(Would it have KILLED Bob Geren to wear the correct warm up jacket?)

But the A's looked awesome. How about the other team? 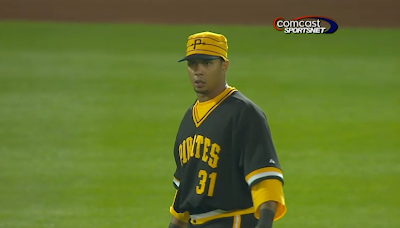 Cue up Sister Sledge! The Pirates looked like the Family again!

Personally I prefer the black hats, but either way, they looked like Champs from the 1979 World Series... a personal obsession of mine.

There are not a lot of Stargell Stars on their hats, but if you've seen the Bucs play this year, not a lot have been earned! 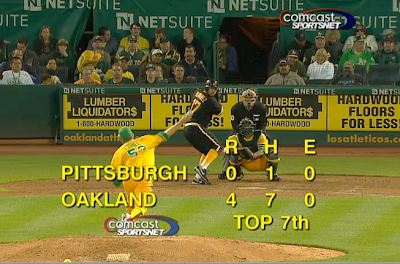 The game itself was cool, but the Comcat Sportsnet broadcast for the A's made it even cooler.

They did not use any graphics that weren't around in the 1970s.

So in came the bright yellow chyron font. The score wasn't permanently in the corner, but flashed on the screen from time to time. 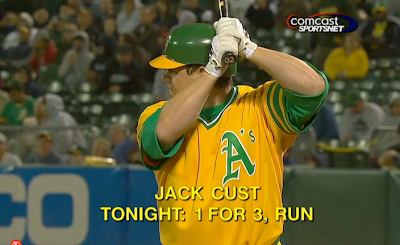 The information when the batters were up was also "Just the facts."

Name, what they did tonight.

No breaking down of how they hit against left handers or their OPS.

(The Yellow font against the yellow jersey was a bit rough.) 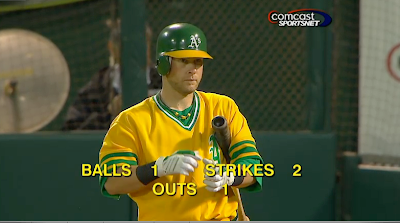 Also the count and the number of outs were not always on the screen but would pop up between some pitches.

I'm not saying it is better like this... but it gave everything a nice nostalgic feel.

And speaking of nostalgia...

The announcers for Comcast Sportsnet busted out the yello blazers and the logo on the breast pocket.

And kudos to A's broadcaster Glen Kuiper for the fake 1970s 'stache to make the outfit complete.

(Nice touch for the engineer to be all hippied out as well. Chances are that's how the 1970s looked in the East Bay!)


So nice work A's and Pirates and nice "above and beyond the call" for Comcast Sports Net.

Two teams that might be going nowhere this year did something cool, funny and fan friendly (as a lot of people in the stands were dressed a la 70s.)

The Pirates don't come through Oakland each year, so a nostalgic look back to the 1970s isn't an annual tradition for these two teams.

Another fun wrinkle for Interleague Play.
Another thing to keep in mind when you hear people trash interleague play.

I say those people are talking jive! 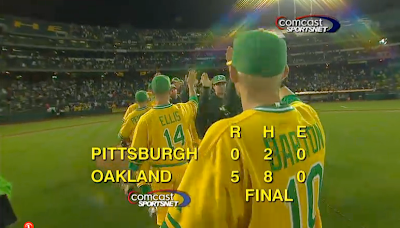