Orioles fans... here are 4 easy steps to making 2010 positive for you 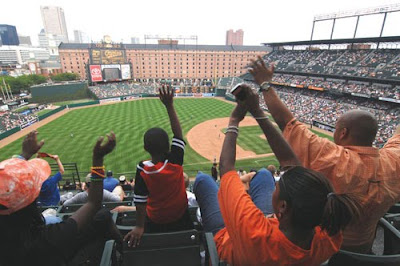 Listen up Orioles fans. I know this year hasn't been fun for you, but you can make it worth your while if you follow these very simple steps from your pal Sully.

STEP 1. ATTEND A GAME AT CAMDEN YARDS THIS SEASON

From the looks of the clips, good seats are available.

STEP 2. GET A PICTURE OF YOURSELF AT THE STADIUM.

Preferably with the scoreboard and a player's face on the JumboTron in the background (I will explain why later.) Keep it stored in your phone.

STEP 3. PUT THE TICKET STUB IN YOUR WALLET AFTER THE GAME.

Don't throw it out with old receipts either. Keep it in there. You'll need it later.

STEP 4. MEMORIZE THE STARTING LINEUP OF THE GAME YOU SAW.

It's only 10 names you need to commit to memory. 9 hitters and a pitcher. If you need a rhyme to help you remember them, fine. But you need to be able to rattle the 10 names off like it is second hand.


OK, why did I just make you all do that? It's quite simple.

The Orioles stink this year. It could be a historic level of suckage. Even with last night's win, they are on pace to go 45-117, making them potentially one of the worst teams in the history of the 162 game schedule era.

But someday the Orioles will be good again. I know it is hard to believe, especially with Angelos running the team into the ground... but someday they will be a pennant contender.

And when it does happen, as a good Orioles fan, you will be thrilled.

And you'll notice getting a seat at Camden Yards will be harder to get.

And you'll see that a lot of the fans won't know the difference between Eddie Murray and Eddie Money.

Yeah it will be fun seeing Camden Yards rocking again, but you'll be among the bandwagon jumpers!

They would be like the bandwagon jumper Red Sox fans with no memory of Mike Torrez possibly being a double agent for the Yankees in the early 1980s.

Or having no memory of the offense depending on the big bats of Bob Zupcic, Scott Cooper, Phil Plantier and Tim Naehring.

Or the Yankee fans who didn't suffer through the turmoil of the 1980s and the disastrous early 1990s when the Yankees sloshed through the Mel Hall/Lee Guetterman/Hensley Bam Bam Meulens/Kevin Maas years.

But when the Yankees starting winning World Series again, I saw my Yankee friends saying things like "I stuck with them when they had Lee Guetterman and Steve Howe in their pitching staff!"

And I called those Yankee fans the other day to express my condolences for the death of Oscar Azocar.

And when my Red Sox started winning, I remember Julius Sharpe, Andrew Donnelly and myself rattling off all the obscure Red Sox players from our youth (from Mike O'Berry to Tom Poquette.)

Which brings us back to you Orioles fans.

Now is the time to establish your fandom cred.

You've done my 4 steps (including keeping the ticket stub in your wallet and memorizing the starting lineup.) So when you are in the crowded Camden Yards and chatting with someone you suspect is a fair weather fan, ask them "were you here in 2010 when the O's were awful?"

Chances are they'll hem and haw. Then say "I've stood by them this whole time."

That's when you pull out the ticket stub. They see that yes indeed you were there.
You show them the picture of you with the scoreboard in the background.

That's when you rattle of the lineup.

And if the guy you are talking to goes blank on those names, then you know they haven't paid their dues.

And if they DO, then you have found a fellow fan who has earned the right to yell for the Birds.

Trust me, the thrill of a title is even sweeter when you can show your loyalty in the dark times.

Now is the dark times, Orioles fans. (The Orioles are losing AS I TYPE THIS.)

But do my 4 steps NOW. It will make the inevitable championship season even better.