Cliff Lee is holding up his end of the bargain 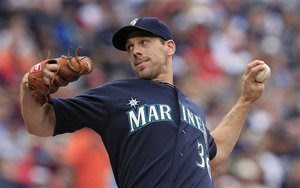 If the Mariners want to get top value for Cliff Lee, then they need Lee to pitch like an elite ace. Well pitching a complete game shutout against a team that started in night in first place should do the trick.

It was a 1-0 complete game shutout... as in he was able to pitch the whole game even though it was a save situation! I didn't know managers were allowed to do that anymore!

Lee should fetch a nice ransom. Whether it will match what Seattle gave up to get Cliff Lee is up in the air.

The deal that sent Roy Halladay to the Phillies and Cliff Lee to the Mariners was so complicated that I think A.C. Milan and the Republic of Ghana were somehow involved.

But in terms of players surrendered, the Mariners gave up three 21 year old players to acquire Lee.

If the Philles offered those three guys back for Lee, I wouldn't make the deal.

So if the Mariners could flip Lee for a better big league bet than the law firm of Aumont, Ramirez and Gillies, then in the end the Lee deal would have been a good one.

They need a buyer and they need to have a kick ass product.

And Lee has done HIS part.