Price wins... it's your move Lester 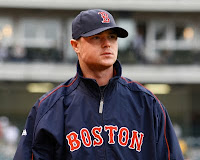 I've written a lot about the NL Cy Young race this year... but not too much about the American League

It hasn't been as sexy a race with the Jimenez's, Halladays, Wainwrights, Lincecums et al dominating.
Right now I'd say two of the front runners for the AL are David Price, who pitched Tampa to an easy win over Toronto last night and leads the AL in wins and ERA, and Jon Lester, the AL Pitcher of the Month in May (based on his 5-0 record in May with a 1.84 ERA) and has the lowest batting average against in the bigs. And since starting the season 0-2 with a 8.44 ERA over his first three starts he is 7-0 with 1.28 ERA.
He goes tonight.
Yeah I know Phil Hughes, Jeff Niemann, Andy Pettitte and Clay Buchholz are all candidates as well but Lester and Price can separate themselves from the pack.
Let's hope Lester gets no hitter #2.