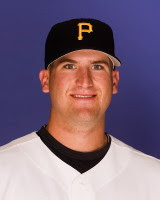 Seriously, as long as you reporters and TV crews and columnists are in Washington covering Strasburg's jaw dropping debut, why not stick around and see if former Pirates first round pick Brad Lincoln make HIS big league debut!
It's actually a nice story. The former Conference USA player of the year was drafted #4 overall by the Pirates in 2006... and as I wrote in a previous post, the Pirates recent history with the draft hasn't been bad, it's been inexcusable.
Brad Lincoln looked like one of those miserable draft picks after signing for $2.75 million. He was the only player in the top 8 selections to have not made their big league debut up until this point.
Oh yeah, pick #10 who was passed over by Pittsburgh? Tim Lincecum.
Clayton Kershaw, Max Scherzer, Daniel Bard, Ian Kennedy and Joba Chamberlain were all available.
As was Kyle Drabek, the son of former Pirates star Doug Drabek who started Game 7 of the 1992 NLCS... the last moment the Pirates were a relevant ball club.
(This goes to my theory that the Pirates rebuilding since 1992 is so ineffective that they should have just put their star players out to stud.) 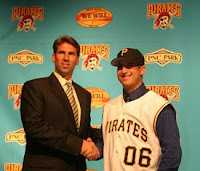 Lincoln joined the Pirates and developed oblique problems, arm problems, had Tommy John surgery, missed the 2007 season and looked like yet another bust.
While Lincecum was winning his first of two Cy Young awards in 2008, Lincoln was putting together a 6-10 season in A Ball.
But things turned around for Lincoln in 2009 when he finally made it to AAA Indianapolis. And this year, with a 6-2 record, he is making it to the show... just a day after Stephen Strasburg did it.
At age 25, he's not as young as Strasburg and doesn't have Strasburg's dynamic stuff. It may have taken him 4 1/2 more years and 50 more minor league starts than Strasburg to make it to the show.
But stick around and watch him. He's earned his way up and who knows? He might surprise you with HIS debut!