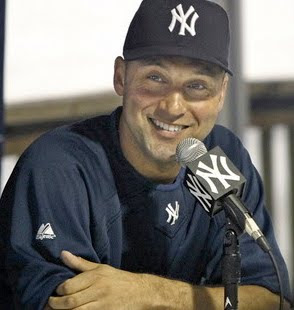 Derek Jeter is going to be a free agent at the end of this year and it is a foregone conclusion that he will resign with the Yankees.

And of course he is the most beloved New York sports star in the last quarter century. (Seriously, who has come close?)

All of that being said... this should not be a free agency where he gets no other bids. 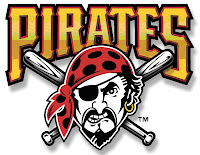 The Pirates need to throw in a bid.

Yup. I am dead serious.

So all of you Pirate fans who think I am picking on you guys... I am not. There is some logic to my insanity.

The Pirates have been bad for so long that there are Pirate fans who can legally buy a drink and have no memory of their team winning 82 games in a season... and not because they are drunk.

And guess what? That is now the identity of the team. In Buster Olney's great book The Last Night of the Yankee Dynasty, he wrote about Luis Sojo's brief time in Pittsburgh. Sojo was stunned how there was complacency in the clubhouse that they are simply not going to contend.

That was 10 seasons ago. They haven't come close to relevance since and are currently the worst team in baseball.

But as I wrote before, there is some hope for the 2011 team. They are cobbling together some nice talent, including Pedro Alvarez at third and an outfield of Jose Tabata, Andrew McCutchen and the grizzled 25 year old veteran Lastings Milledge. Plus there are some decent arms that are going through some growing pains.

Each of those teams had a new comer who had post season experience and simply wouldn't tolerate losing. And it rubbed off.

Don Baylor came into the Red Sox clubhouse and helped turn a fractured team into almost a World Series winner.

Kirk Gibson stormed out of the Dodgers spring training when he felt there was too much joking. He led by example and even homered when he couldn't walk.

The 1991 World Series was between teams that were in last place the year before. Charlie Liebrandt helped anchor Atlanta's rotation and Terry Pendleton had an MVP season sparking the line up. Meanwhile the Twins imported Jack Morris to the rotation and 10 innings in Game 7 later, the Twins were champs.

Jim Leyland turned the 2006 Tigers around with some help from Pudge Rodriguez, who started the change in the culture a few years prior.

And importing some veterans like Cliff Floyd transformed Tampa from the laughing stock of baseball to a pennant winner.

Now of course each of these teams won because their talent clicked... but you can point to those veterans who helped turn the proverbial rag tag bunch of also rans into contenders.

Which brings us to the Pirates.
They desperately need someone to help change the culture and stop the "They haven't been above .500 since 1992" clock.

They need someone to tell Milledge and Alvarez how to play the game and not let the Pirates be content with losing.

And we're not even pining for a World Series winner. An 82-80 record will get the monkey off their back.

Who commands more respect than Jeter?
Who do you think would be LESS tolerant of a clubhouse that has all the peppiness of a Droopy cartoon?

The players would play UP to his level... or at least try to the same way any of us try to do a good job when someone we respect is watching us.

The Pirates NEED to go into this free agency period and put in an offer for him and do it publicly.

Now do the Pirates have a shot?
Of course not. Jeter is a Yankee for life. We all know it. And the Yankees will out bid the Pirates in a matter of nanoseconds.

And in the end the Pirates won't have to spend the money they bid.
But at least it would be a positive gesture.

And telling their fans "We see what part of the problem is" is a start.

(But man, wouldn't it be cool to see him in Gold and black?)