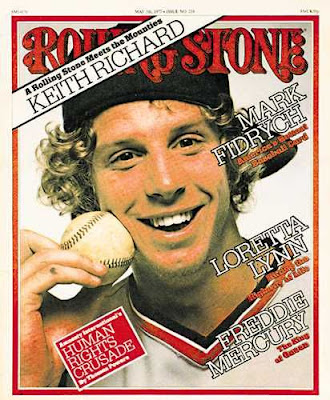 I realize on my Rest in Peace post for Mark Fidrych I used a picture of him on the cover of S.I.
Now there have been a lot of baseball players on the cover of S.I. But Fidrych was the first ever athlete to appear on the cover of Rolling Stone.
Not Joe Namath.
Not Ali.
Not Arthur Ashe.
Not Billie Jean King.
Not Kareem Abdul Jabbar.
Not Bruce Jenner.
It was the Bird.
If THAT isn't a sign of how loved and cool he was, then I can't think of a better barometer.
I was originally going to change the picture on the Rest in Peace post. But then I figured the Bird was worth two posts!
Posted by Sully at 3:10 PM