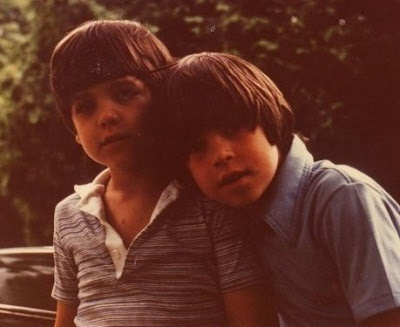 When I went to Chain O Lakes Park in Winter Haven, I collected autographs with my brother Ted.
When I went to Games 3 and 4 of the 1988 ALCS in the Oakland Colosseum just to see the Red Sox lose the pennant, I was with my brother Ted.
And when I was hooked on Crisis on Infinite Earths, Teen Titans, Batman - The Dark Knight Returns and Watchmen, I was hooked with my brother Ted.
Now over the years my interest in comics has faded, but clearly my love of baseball hasn't.
Ted's home is filled with original comic art as his love hasn't faded one bit, but he's stopped following baseball.
I guess you can only retain one childhood obsession.
But Ted stopped by to see his nephews the same day as Game 5 of the 2008 ALCS... the game the Red Sox came back from down 7-0 to the Rays on the verge of elimination.
And when Crisp kept fouling off the pitches, I could see him get excited again.
And we both leapt off of the couch when J. D. Drew got the game ending hit.
I'm not expecting to have him be the big baseball fan again... but it was nice to have it back for a night.
Happy Birthday to my brother Ted.
Maybe I'll read a comic book in his honor today.
(Ooops. I'm sorry... a graphic novel.)