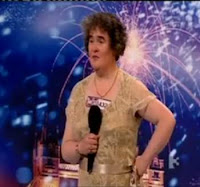 I am man enough to admit I watched that Susan Boyle clip and smiled, laughed and cried a little.

Nothing wrong with letting something move you.

Try watching Rocky, Hoosiers or Field of Dreams and look me in the eye and tell me ONE of them didn't move you to tears!

(Actually you won't be able to look me in the eye because I'll be crying.)

For the two people on the planet who haven't seen it, here's the clip.

Now for those of you sports fans who don't understand what the big deal is, let me put it into terms that might clear it up.

When you watch a sporting event, there is inevitably an out of this world scenario that pops into your head. "Wouldn't it be amazing" if this happens or that happens. It usually is a big upset, or an unknown getting the big hit.

But every once in a while a scenario unfolds that is so incredible, so amazing that people constantly describe it as "out of a movie" or "if they put it into a movie, nobody would believe it."

Think of the Kirk Gibson homer. When he was limping around at home... with 2 strikes on him... and Dennis Eckersley on the mound... you had one part of your brain imagine if suddenly he hit a homer. But you knew it wasn't going to happen.

Which is why his homer was even more amazing.
As Jack Buck said "I can't believe what I just saw!"
Bob Costas described it as a B Movie moment.
And any baseball fan (other than Don Marquez) gets chills when they see it... remembering that moment that an impossible "don't even let yourself think it" moment REALLY happened.
Well that was Susan Boyle.
It's something you hope for, but know will never happen. There won't be some frumpy spinster sitting in a village in Scotland who is so talented that she gets a standing ovation and moves the snarky judges to tears.
And she did it... and it really happened. It was the Gibson homer of Reality TV moments.
I can't embed the clip of Susan Boyle onto the site.
But I CAN embed the Gibson homer.
It's worth watching again