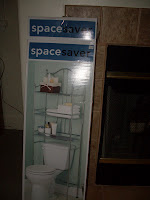 When my wife realized today that her loving and caring and faithful husband was going to be spending the bulk of his Saturday afternoon watching the Red Sox and the Yankees... she decided to put the time to good use.

She gave me a box. Inside the box was a metal space saver she bought for the bathroom. Basically a shelf to put around the toilet.

Now anyone who knows me (and I would like to put my wife in this category) knows that my shelves get cluttered pretty quickly.

So naturally I want to have a shelf that if it gets cluttered and something falls off of it, it goes directly into the toilet.

But I am a dutiful husband. Besides, unlike last night's extra inning thriller when I was forced to be in the company of lovely people and eat good food in Arcadia, I would be watching this game.

My wife said "It will be easy to put together."

That's what they said to Alec Guinness when they started working on the Bridge over the River Kwai.

I emptied the contents out 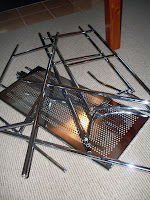 It was a big pile of metal.

Now let me make something clear, dear readers. I HATE putting furniture together.

My friend, the wonderful comic, co creator of Breakup Girl and my one time boss Lynn Harris once said that "Ikea is Swedish for 'Wobbly.'"

I 100% agree with her. It never comes out the way you hoped. There is inevitably one step you missed or one screw you put in backwards.

I usually find out the mistake at the last step, which means tearing it apart.

Or else I just throw my hands up and say "The coffee table will lean to the side! Deal with it!"

When I try to build something, I basically turn into the dad from A Christmas Story, weaving a tapestry of profanity.

In fact I have a simple professional goal: I want to make enough money to buy furniture that is either already built or be able to pay some schmuck to do it.

So I begin to piece this metal sculpture that will wrap around my crapper together. 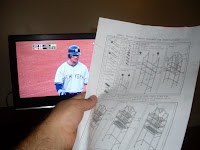 And of course the instructions are no help!

Instead of a series of clear step by step directions for a simian like me, they are a bunch of vague drawings and arrows.

They might as well have just put a Post-It note in the box saying "Good luck with your wobbly toilet shelf, sucker!"


Meanwhile I was watching the strangest, sloppiest and one of the longest regular season games I have ever witnessed.

First Beckett is awful and Burnett looks great.
Then suddenly Burnett stops throwing his curveball and Jason Varitek of all people hits a grand slam.

Back and forth... Ellsbury homers, Ortiz doubles, Bay singles. I'm in heaven.

The ghost of Grady Little inhabits Terry Francona and he leaves in Beckett long enough to tie the score.

Errors are made. Pitches are hung. Pedroia makes a base running mistake and is tagged out then lets a ball go through his legs.

Damon gets picked off.

And your pal Sully struggles with the new shelf. Of course I am half paying attention to what I am doing as the game has me transfixed.

I could have screwed one of the metal rods to my shin and not known until the 7th inning. 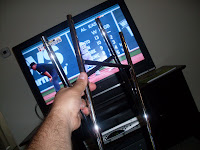 At one point I looked at the instructions and they called for me specifically to use rod "D".

And the directions had little drawings of which part was which.

There were four rods that were "C" and one that was "D." The drawings all looked exactly the same.

And of course the rods themselves weren't labeled.

So basically I had to reenact the Grail scene from Indiana Jones and the Last Crusade and hope that I don't hear "He chose poorly" when my wife's good towels fall into the John.

By the 8th inning and what seemed like the 46th lead change, I brought the pieces into the bathroom.

My sons were insistent on helping put it together and somehow by some miracle it didn't fall apart.

Equally amazingly, neither did the Red Sox.

But the Yankees, like many future towels in that bathroom, fell right into the toilet.