A strange observation about the Yankee Stadium 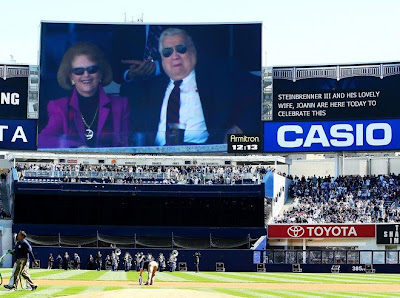 First of all, I need to point out that while I am a huge Red Sox fan, I loved Yankee Stadium.
I only knew the remodeled stadium (my first game there was in 1978) and I think I went to Yankee Stadium more than any other park. So while it may sound like a contradiction, I am indeed a Red Sox fan who reveres Yankee Stadium.
And when I saw my first game, it overwhelmed me. It seemed like the biggest place I had ever seen in my life.
OK, I am dying to go to a game in the New Stadium... but there's something I found odd.
By making the videoscreen in center field so big, it screws up my own sense of perspective on the stadium.
It actually makes the New Stadium seem smaller than the last one. Maybe it is an optical illusion, but when I kept hearing Bob Costas, Jim Kaat and Harold Reynolds talk about how big it was, I kept saying "It looks SMALLER."
I guess I'll just have to go there myself.