First "I'm Pissed Off" Game of the Year 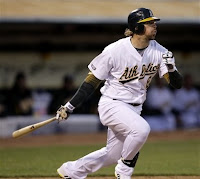 Nothing good happened tonight for the Red Sox.

This is the first "DAMN IT!" game of the year.

The first game that will make me grind my teeth.

The first game that I will remember if the Red Sox miss the playoffs by a game or two. 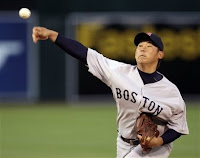 GREAT!
No really... I wanted BOTH Lester and Dice-K to suck.
Who needs a 16 game winner and an 18 game winner both under 30?
(Please tell me John Smoltz, Clay Buchholz and Michael Bowden are ready!!!)
Then the Red Sox tie it up and the bullpen does an amazing job.
Masterson throws 4 shutout innings... DelCarmen gives 1 2/3 shutout inning... the new kid Ramirez goes 1 1/3... Okajima gives 2 shutout innings... Papelbon throws a 1-2-3.
And the Red Sox can't score!
They had the bases loaded and Ziegler unable to throw a strike... Papi up... a 2-0 count.
I'm sorry, but Papi is no longer the Papi of 2003-2007. At that point you force Ziegler to throw a STRIKE!
Nope, Papi swings and pops it up.
And then comes the immortal Javier Lopez. He didn't just let up 3 walks in 2/3 of an inning (always impressive in the box score) but his pitchers were NOWHERE NEAR THE PLATE!
His relief appearance was nothing short of grotesque.
And if you are going to lose a game in extra innings... have the DECENCY to lose on a walk off homer!
NOT a bases loaded, out at every base, perfectly placed, 2 out, infield hit.
It made me long for a balk.
So now the team is 2-6.
The team that everyone (but me) picked to win the AL Pennant is off to their worst start since 1996... a year they failed to make the playoffs.
But do you know what really ticks me off?
I watched it to the end.
Doesn't that suck? I should have turned it off after I saw they couldn't keep a 3-0 lead.
Time to turn it around... or this could be a long long season.
(My picking the A's to win it all didn't look so dumb tonight!)