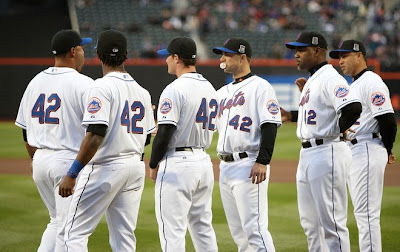 O.K. I understand intellectually why some people might think that removing the choice of wearing 42 and making it mandatory makes the decision less of a tribute and more of a requirement.
But so what?
Seriously, when you see the whole team wearing #42 it is memorable. I watched several games and seeing every player coming up with Jackie's number was almost startling.
It was a wonderful symbol of unity for a man who fought against division. And started the ball rolling that led to our current President being elected.
How could one or two players wearing that be as powerful?
Instead of saying "Hmmm... I thought Torii Hunter was #48" you could have people asking "Why is EVERYONE #42?"
And then discussions can start of Jackie's greatness. (And as I pointed out a few years ago, that greatness wasn't just social courage, but he improved baseball forever!)
How is that a bad thing? And don't assume everyone knows about Jackie.
It's not that long ago that Vince Coleman stated so eloquently "I don't know nothing about no Jackie Robinson."
That's a triple negative... which means he knows nothing about Jackie Robinson.
So put the intellectual argument away for a day.
For once, I agree with Bud Selig.
And if THAT isn't a sign of how Jackie Robinson can unite us all, I don't know what is!