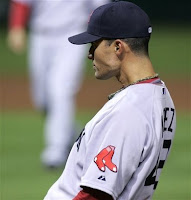 Well that was horrible.
Brad Penny was worth less than his name, the Red Sox blew an early 5-1 and 7-3 lead and "SURPRISE!" Javier Lopez found a way to lose the game!
I suppose it is appropriate that Lopez lost the game just before the 11 game streak and then lost the game that ended the streak.
But I suppose I can't get too upset, even though my feelings for Lopez and his worth remain the same as before.
(I give bonus points for Lopez in finding a new and unique way for losing the game. Dropping a 3rd out in the 9th inning? BEAUTIFUL!)
Yes it was another "I'm Pissed Off Game."
But the Red Sox have also had a few "Dodged a Bullet" games in the 11 game stretch.
The game on April 17th against Baltimore... the Red Sox were down 7-0 in the second. The Red Sox had no business winning that game.
The first game against the Yankees, on April 24th... the Red Sox had no business winning a game with two outs, down by two and Rivera on the mound.
And the next day, April 25... the Red Sox were down 6-0 and lifeless and won the game.
So this year, the staff at Sully Baseball is going to keep a running tally of "I'm Pissed Off" games and "Dodged a Bullet" games.
We feel that if the Red Sox dodge more bullets than p*ssing me off, they will have a solid shot at the Division.
Plus it will help temper any anger if the dodging out weighs the p*ssing.
This is getting strange in terms of the wording.
So, here's the tally thus far:
"DODGED A BULLET" GAMES - 3
"I'M PISSED OFF" GAMES - 2
Not bad.
This tally will be kept up all season long.
And if you think I won't keep it going all season long, then you don't know Sully Baseball!