A possible case against Brian Cashman 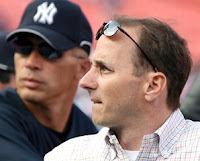 Usually when I hear fans, especially Yankee fans, calling for the heads of the GM or manager in April, I give a little snicker.

But there are more and more Yankee fans calling for Brian Cashman's head. And do you know what? They could have a point.

I am not a fan of dumping a GM in mid season. It's a panic move and other GMs know that the replacement is either scared to make a big move or vulnerable.

But this Yankees team at least at this point has been horribly assembled.

Yes, he landed the big fish in Teixera, Sabathia and Burnett.

But what is mindboggling about this team is their complete lack of depth.

A-Rod goes down. Obviously there is no replacing A-Rod's prescience in the line up. But when a team is spending $65 million dollars more than the second highest payroll, they should have a utility infielder with some big league experience.

I'm not saying have another All Star. But with $200 million to throw around, shouldn't there be an infielder off the bench that people say "He'd start on any other team"?

Shouldn't that player be better than Cody Ransom?

And if the series in Boston has told us anything so far, it's that you can't blame ALL the pitching woes on the wind in the new Stadium.

17 games into the season... the pitching staff has let up 9 or more runs 5 times.

The bullpen is horrific. Veras can throw a good outing now and then, but his 6.30 ERA suggests what else he can do now and then.

Coke, Ramirez, Marte... all have ERAs that read like Social Security numbers.

And now there is talk of searching the waiver wire for other teams scraps to throw into the bullpen.

A bunch of relievers not good enough to make their team's 25 man roster are now going to be thrown into the Yankee pressure cooker? That should work out great.

Cashman has had control of the team since after the 2005 ALCS. Since then the pennants have run dry, the Division Title streak ended, the post season streak ended... and now... after spending $200 million on payroll when no other team topped $136 million... are looking for any live arm who can throw the ball 60 feet 6 inches.

Cashman rolled the dice to trust Hughes and Kennedy. So far that's been a disaster of Isringhausen/Wilson/Pulsipher proportions.

The Joba situation has been screwed up to the point where he doesn't go deep into starts and there is no depth in the bullpen when he comes out.

He took a team that was old and bloated and transformed them into a team that is disconnected.

All this while playing to empty seats in their new Coors Field in the Bronx.


I know I am a Red Sox fan and I am going to get a lot of hate e mails from Yankee fans for this post. But a lot of bad things have happened on Cashman's watch... and the biggest moves have come from the opening of the Steinbrenner wallet.

Honestly, can any Yankee fan look me in the eye and say they are better now than they were in 2005?

I'm not saying he should be fired.

I'm not saying that Joe Girardi is without blame.

All I am saying is for the first time in a long long time, I am not dismissive of people who think he should be gone.