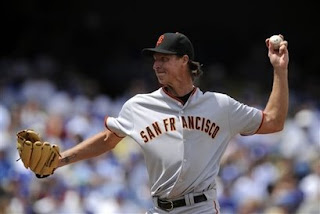 Randy Johnson signed with the Giants primarily to win 5 games and get to 300 in his career.
After two games, he is still 5 wins away.
He is 0-2 and his ERA is 11.42.
Let that ERA soak in for a moment. If he slashes that in half, it will still be awful.
He came to the Giants to cement his place in history... and instead all he has done is help put Orlando Hudson in the Dodger record books with his hitting for the cycle today.
While I know it is early in the season, it is late in Randy Johnson's career. He's 45 years old. When 45 year olds who have had injuries over the last few years and pitching in their 22nd season get off to bad starts... it could be because it is over.
I am a huge Randy Johnson fan. I praise him left and right in the Home Grown vs. Acquired series.
But he is reminding me now of Dale Murphy and Fred McGriff... and not in a good way. 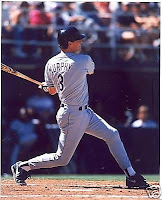 Remember when Dale Murphy was hanging on at the end of his career?
He had 396 homers going into the 1992 season with the Phillies. But injuries kept him to 2 homers that year.
So he signed with the expansion Colorado Rockies in 1993. That was the pre-humidor days in Denver where they called Mile High Stadium their home and were basically playing in zero gravity.
Surely a great slugger like Murph could get 2 knocks there. Heck, I bet I could hit one in that thin air.
It didn't happen. He went 2 for his last 25 and had only one extra base hit (a double.) He was released in May of '93.
He never got homer #400 and his Hall of Fame bid has been lifeless. 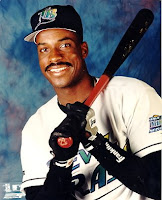 As for McGriff, he went into the 2004 season with 491 homers. He went back to Tampa Bay with the hope of knocking 9 out of the park.
He did better than Murph, but then again when you consider that I tied Murphy in the home run department in 1993, that isn't a very high bar.
McGriff hit two homers, his last one on June 17th off of Adam Eaton in San Diego, one of Fred's former teams.
But after 27 games, he was let go.
His final home run total was 493. I am not brimming with confidence in McGriff's pending Hall of Fame candidacy.
Johnson doesn't need 300 wins to get into the Hall of Fame.
His 5 Cy Young awards speak for themselves.
So do his three other Cy Young runner up seasons.
So does his World Series MVP trophy, the 8th lowest career ERA, and the second highest number of strikeouts in baseball history.
I hope The Big Unit doesn't hang on for the sake of hanging on, like Murph and Crime Dog.
Then again, without 300 wins, the Hall of Fame hasn't opened their doors for Bert Blyleven either.
Hmm... I guess you had better with those 5 games.