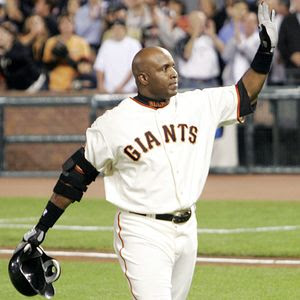 You are getting terrific pitching! You even got 7 shutout innings from Barry Zito yesterday. I didn't think that was possible.
The lineup remains horrific.
Don't believe me? 10 out of 14 games you've scored 3 or fewer runs. Which means 10 out of 14 times you've needed a lights out pitching performance to have a shot.
And Matt Cain is living proof that you can be a great talent, but you can't win without the run support!
Your lineup needs a shot in the arm (or the butt.)
It lacks juice!
Something needs to pump it up.
The performance needs enhancing!
I'll say it.
You need Barry Bonds back!
Come on! He's available! He's technically a free agent! And he wouldn't cost the team any draft picks.
Even if he did, you'd be giving the picks to the Giants... which is YOU!
You won't have to trade any prospects for him. The amazingly named Madison Bumgarner will still be in the system.
And it's not like you can say "Oh... will he be a distraction?"
OF COURSE HE'LL BE A DISTRACTION! He'll distract fans from the fact that Randy Winn is the most feared name in that line up!
Even if he can't hit them out anymore, he can draw a walk, he can get on base and maybe take the pressure off of the Sandovals and the Ishikawas on the team.
Or are you expecting Edgar Renteria to hit a grand slam every night!
COME ON! You spent every year between 1993-2007 saying "Hey! Barry will put butts in the seats."
2008 wasn't pretty.
Help is just sitting at home.
Make the call.