One Week In... And Two NL East Teams Fascinate Me 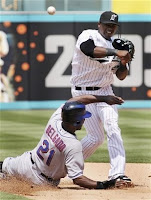 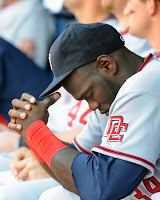 I don't really care about the Marlins nor the Nationals. And based on ticket sales, neither do anyone in Florida or Washington, DC.

But a week in, I find these two teams to be fascinating for completely opposite reasons.

The Marlins have some of the most exciting players in baseball. They are young, they are hungry and they are coming off of a winning season in '08 wanting more in '09.

Josh Johnson pitches a gutty complete game against the Mets...
Emilio Bonifacio is showing the world what a post-steroids star looks like...
Anibal Sanchez could be all the back from injury plagued 2007 and 2008 seasons...
And Hanley Ramirez might very well be the most valuable player in the National League NOT named Pujols.

I predicted they would win 90 games, and while we are just a week into this season... I don't see why they can't.

Now start showing up, Marlins fans! You have a hell of a product on the field!!!

As for the Nationals, forget 90 wins. At this point I wonder if they are going to get 9 wins!

Seriously, this team is grotesque. I've already declared their season over... but it might get even worse.

They went 59-102 last year. Does ANYONE think they are going to improve on that record?

Cristian Guzman is doing the smart thing and putting up cool numbers (and no doubt will be dealt.)

But look at this team. Other than their horrible pitching, rancid defense and anemic offense, they're in great shape.

I hate to say it, Washington fans (both of you). But I am fascinated by your team's badness.