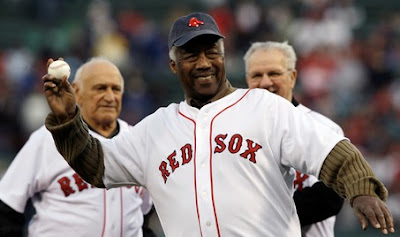 There is nothing I can say about Pumpsie Green better than Gordon Edes in his terrific column for Yahoo Sports.

But I wanted to salute Pumpsie myself.
I can't imagine what it must have been like to break the color barrier in Boston during the 1950s.
And most of all, to do it with that horrific franchise destroyer, Tom Yawkey, at the helm.
Red Sox manager Pinky Higgins vowed that "there will be no n-ggers on this ball club as long as I have anything to say about it." Yawkey was so offended by that sentiment that he kept him on the payroll for nearly 20 years.
It was bad enough playing for a Yawkey in the 1980s (when Tommy Harper won a racial discrimination suit against the club.) The 1950s must have been unbearable. And he deserves all of our salutes.
By why did we have to honor Pumpsie Green? Shouldn't he be a kind of obscure middle infielder on the Red Sox of the 1950s?
If the Red Sox are going to honor which of their players broke the color barrier, shouldn't Willie Mays be throwing out the first pitch? They had a shot to sign him?
Shouldn't Tom Yawkey, the man his apologists claim would do ANYTHING to win a title for Boston, have signed Ernie Banks? Or Frank Robinson? Or Hank Aaron?
The Red Sox famously had the first shot to sign Jackie Robinson and be not only a pioneer but MAKE THE TEAM BETTER!
Instead they waited until Jackie Robinson had retired and the Dodgers left Brooklyn before reluctantly bringing Pumpsie Green in as a pinch hitter.
And once again, this wasn't just about social justice. Did you notice the Jackie Robinson played in the 1947, 1949, 1952, 1953, 1955 and 1956 World Series?
Do you know how many pennants the Red Sox won in that span?
Zilch.
Yes, honor Pumpsie, but let's also use this as once again a forum to DISHONOR the Yawkeys.
Most of the 86 seasons of the curse took place under their watch. Maybe like most superstitions, the Curse was focusing on the wrong cause.
Yes the Red Sox didn't win the World Series for decades after Ruth was dealt, but isn't a more relevant cause for such a downturn be the people actually running the team?
Here's a reason they didn't win all of those years:
They honored Pinky Higgins over Jackie Robinson.
Here's a sign that it had more to do with the Yawkeys:
The family had control of the team from 1933 to 2002.
They sold the team before the 2003 season.
The Red Sox have won 2 World Series since then.

I hope Pumpsie went over to the Green Monster to take a leak.
Not inside the Monster like Manny... I hope he pissed on those Morse Code symbols on the wall that honor Tom and Jean Yawkey... the two people most responsible for keep the Red Sox without a championship for 86 years.