Got to give credit where it is due 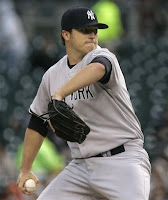 I had made fun of Phil Hughes and Mark Melancon in my previous post... but I have to tip my cap to them.

They combined for 7 innings of shutout 2 hit ball and the Yankees cruised.

And thus far has one other distinction:

He's the last Yankees pitcher to win a post season game (Game 3 of the 2007 Division Series.)

So this passionate Red Sox fan will ease on the throttle for Hughes and Melancon. It will be interesting to see how the New York press anoints Hughes as the next ace, won't it?