AL West... now is your chance!

A lot of people thought I was batty for picking the A's to win the A.L. West.
The Angels have had a stranglehold on it! They've won it 4 of the last 5 times! They won 100 games last year!
Fine.
But as I said in my equally batty 40 Fearless Predictions, I felt the Angels were vulnerable. Their offense is based around Vlad Guerrero and you remove his prescience from the middle of that order and you have a very beatable team.
Well guess who is on the DL now?
Vlady is gone until probably June. And who knows what kind of hitter he will be off of the DL.
Throw in the fact that Kelvim Escobar, Ervin Santana and John Lackey are on the disabled list. So is spot starter Dustin Moseley... not to mention the Nick Adenhart tragedy.
Suddenly you are looking at a team that is going to lean on Bobby Abreu and Torii Hunter in the line up... Joe Saunders and Jered Weaver in the rotation and a lot of question marks in the bullpen. 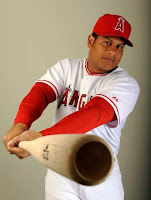 Not to belittle Abreu, Hunter, Saunders and Weaver... all who are capable players... but they are certainly not the foundation of a prohibitive favorite!
They just got swept by the Twins and who knows if they are going on a prolonged slump?
Yes they have Mike Scoiscia, arguably the best manager in the game. But even John McGraw, Earl Weaver and Leo Durocher had losing seasons!
The main point is if I were running the Mariners, A's or Rangers, I would look at the misfortune of the Angels as a chance to win a suddenly winnable division.
Already the Mariners are off to a better than expected start. The A's and Rangers and sub .500, but all of their teams should take a look at their most glaring holes.
The Mariners need another starter in the rotation.
The Rangers need 2 or 3 starters.
The A's need a legit #3 hitter.
Yeah, I know it is early and nobody is selling at this point... but I would say look in your farm. Is there a hot prospect you can plug in now? Look at the available free agents? Is there a Dave Roberts or a Ray Durham who can give your team a little spark?
These wins count just as much now as they do later in the year. Show your fans that you are going for it.
As for my prediction of the A's winning it all? That might be batty... but I am standing by it!